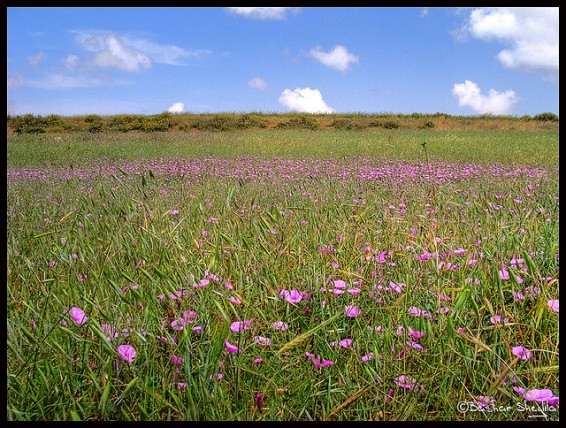 [Jesus] said, “The kingdom of God is as if someone would scatter seed on the ground, and would sleep and rise night and day, and the seed would sprout and grow, he does not know how. The earth produces of itself, first the stalk, then the head, then the full grain in the head. But when the grain is ripe, at once he goes in with his sickle, because the harvest has come.”

He also said, “With what can we compare the kingdom of God, or what parable will we use for it? It is like a mustard seed, which, when sown upon the ground, is the smallest of all the seeds on earth; yet when it is sown it grows up and becomes the greatest of all shrubs, and puts forth large branches, so that the birds of the air can make nests in its shade.”

With many such parables he spoke the word to them, as they were able to hear it; he did not speak to them except in parables, but he explained everything in private to his disciples.   – Mark 4:26-34

I didn’t mean to give Ed a heart attack.

Well, it wasn’t really a heart attack, but at the time it almost seemed almost like one. Let me explain. You see, even though my father grew up on a farm, as part of a big farming family, I didn’t. I grew up as a town boy, and although there were plenty of farms around the town I grew up in, my firsthand knowledge of farming, then and now, is pretty limited. This made for some interesting situations in my first pastorate, which was serving a wonderful, small congregation in southern Ohio that was literally in the middle of miles of some of the most beautiful, fertile, flat farmland imaginable. As I’d navigate through the fields of corn, wheat, and soybean on the hour-long trip between my home and the church, it was like driving through an incredible, always-changing oil painting. And it was one of those scenes that caused Ed’s near-heart attack.

One spring, shortly after the fields had been plowed, I was driving down to the church for a Saturday morning men’s breakfast and Bible study. And I noticed that almost overnight, the fields had filled with a sea of little purplish-colored flowers. Their deep color, and the greenery glistening with the morning dew and sparkling in the bright morning sunlight, all under the almost endless, crystal-blue, biggest sky this side of Montana – it was really a strikingly beautiful thing. When I got to the church, as we were eating breakfast, I mentioned the scene to the guys there, and I said I knew the purple things were some kid of wildflower; I didn’t know what they were but in any case they sure were pretty. And that’s when Ed, who was around 75 at the time and had probably been farming since he could crawl, almost had a cow right there on the carpet. He actually spit his coffee, and his heart almost vapor-locked as he sputtered, “Pretty? Pretty? Those aren’t pretty; they’re morning glories! They take over everything and everywhere, they’ll choke out whatever you plant; I think I’ve spent half my life trying to get rid of those awful things!”

I am not a farmer.

Well in this passage from Mark, Jesus just told a bunch of people, undoubtedly including a bunch of farmers, that the kingdom of God is just like morning glories. That’s basically what mustard shrubs are. I know for a long time, when I’d read this parable and I’d try to imagine how Jesus is portraying the kingdom of God, I’d picture some big, majestic tree that’s chock-full of a bunch of cheerful, happy, Disney-animated wildlife, all singing some happy song like It’s a Small World or something like that.

But that wasn’t what Jesus was actually trying to portray at all. The farmers that Jesus was talking to knew that mustard shrubs were invasive, pervasive. They grew quickly, and they overtook scarce farmland. They were wild, erratic, and would get large, casting shade that stunted the remaining crops around them. And the animals that they sheltered were more cursed than cute; they were the animals who ate the seed before it could grow, and ate the crops after they did. So why would Jesus say the kingdom of God was something like that?

Maybe because whether we like it or not, the kingdom of God doesn’t play by our rules. Wherever it takes root, it grows and spreads on its own terms, faster and more tenaciously than we’d imagine. It is anything but decent and in good order. It doesn’t care about our timelines or clocks or schedules or plans.  It goes where we don’t expect it to; it goes where we don’t want it to. It laughs at the neat, orderly rows that we’d planned for our fields; it really doesn’t care about the fences or boundaries we set or the pre-calculated yield per acre we’re expecting. And the people who end up finding shelter and a home in the kingdom of God are often the people who are looked down on in society – the scorned, the marginalized, the ones not fit for polite company, the ones who are just as troublesome as the birds and animals in the mustard shrub.

The people in Jesus’ time wanted their experience of God, their encounter with God and God’s kingdom, to be as carefully planned and standardized and managed and controlled as their farmland. They wanted to encounter God in a predictable and non-threatening way, a socially acceptable way that didn’t rock the boat. They wanted a God that stayed inside the lines.

But in this parable, Jesus was telling people that God’s love, the way of the kingdom of God, is always coloring outside the lines. God’s love knows no boundaries that we’d set for it, it doesn’t abide by any social or cultural norms we’d try to make it obey, it welcomes and accepts the most socially unacceptable within its loving shelter. While we might need to work hard to get the morning glories or mustard shrubs out of our farm fields, when it comes to God’s love and the kingdom of God, what we need to do is to just get out of its way and not do anything to obstruct it. Let it sweep up and cover the whole earth. Let it take in all of us, supposedly respectable and otherwise. The best thing we can do with this wild thing of God’s love is not to obstruct it, but to nurture it, to try to let it grow and spread even more.

And that’s exactly what we do in our Christian Ed ministries, all of those things that our congregation does that we recognize here this morning. Whether it’s directed toward children, youth, or adults, what we’re doing is planting seeds designed to grow the kingdom of God, to plant the love of God into hearts, and to spread that love to others. That’s our whole job as members of that kingdom. Father Mychal Judge, the New York City Fire Department chaplain who was killed on 9/11, had a short, very simple prayer that sums up how we should be part of God’s kingdom, and to let it grow as wildly and unpredictably as God sees fit. He prayed, “Lord, take me where you want me to go, let me meet who you want me to meet, tell me what you want me to say, and keep me out of your way.” That’s a pretty good approach. But just to be on the safe side, make sure that when you’re saying whatever it might be that God wants you to say, they don’t have a mouthful of coffee.