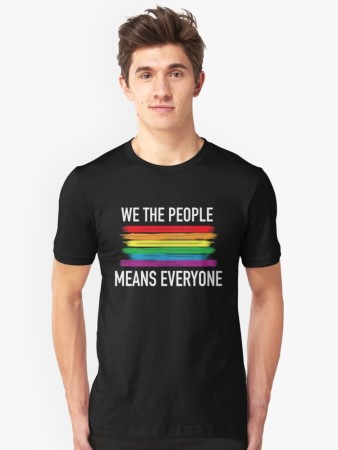 Yesterday, nine Supreme Court Justices heard arguments that will have a major effect on the lives of LGBTQ+ people, and our society in general, for probably a generation. Based on the arguments made in a surprisingly small amount of time far out of proportion to their import, these Justices are going to determine whether under Title VII of the Civil Rights Act of 1964, it is Constitutionally legal to fire a person simply because they are LGBTQ+.

Currently, almost half of the people questioned in a recent Reuters survey actually believe it is already illegal to do so. Further, “The poll indicates that most Americans do not think religious objections should be a reason to deny service to an LGBTQ person, whether in business (57%), healthcare (64%) or employment (62%).“

The unfortunate reality is quite different. While the federal Equality Act, which would ban all such discrimination independent of any interpretations of Title VII, remains in a years-long state of Congressional limbo, only 21 states currently have enacted laws that provide full non-discrimination protection for LGBTQ+ individuals.

What that boils down to is this: there are currently some 11.3 million LGBTQ+ people living in the United States; about 8.5 million of them are currently part of the workforce. Roughly half of us live in states without non-discrimination protection. So in an odd twist, the Supreme Court has ruled that LGBTQ+ people have the right to marry as a matter of basic human dignity, but under current law, exercising that human dignity by getting married on Saturday can – and often does – result in our getting fired from our jobs, thrown out of our apartments, and/or denied service in commercial and retail settings, on the following Monday for having done so. Doesn’t sound very dignified to me.

It pains me to know that there is a substantial minority of people in this country who believe that a.) I am somehow a less important, second-class citizen of this country compared to them based solely on who I love; and b.) they have a Constitutional, and in many of their minds, a God-given right to discriminate against me by withholding the same civil rights that they enjoy as a matter of course.

These justices are set to decide whether my full equal rights as a citizen of this inherently secular, pluralistic republic will be protected; whether the rights afforded to all citizens by the 14th Amendment to the Constitution to equal protection under the law will be protected for me, too, or whether they won’t, merely on the basis of the gender of the person whom I love.

To be clear, our country has offered tacit – and frankly, unconstitutional – privileged status to adherents of the Christian faith since its very beginning. As a nation, we have always played fast and loose with the actual words and clear meaning of our First Amendment position regarding religion, paying them lip service but always giving a wink and a nudge when applying them to Christianity and Christians. We Christians have enjoyed the privilege of a usually unspoken, sometimes explicit “Yes, but” stance in applying the concepts of non-establishment and especially non-endorsement of any religion on the part of the government. A large part of the current problem is that a particular subset of Christians is upset, seeing parts of their inappropriate privilege crumbling away as the country gradually lives more fully into the words of our founding texts. I suppose I could find a more diplomatic words of comfort to offer them in their time of perceived loss, but all I can come up with is tough shit. Literally millions of people, all of them citizens of this country fully equal to you, have suffered for far too long because the government has unconstitutionally permitted your particular sectarian religious beliefs to be imposed on all of society. It’s high time we came to our collective senses, and stopped allowing ourselves to be led around by you as you like, as if we’ve got a ring through our nose.

And yet… here we are, with these nine individuals hearing arguments and deliberating  whether I will, in fact, be treated as a full, equal citizen of this country, or whether the religious opinions of some members of society – somewhere between 25 and 30% of society, according to surveys – may legally make me a social, cultural, and Constitutional, less-than.

Reports from inside the chamber during those arguments say that based on the questioning by the Justices, the vote will end up being close, and that it may be decided by one swing vote made by a Justice who openly fretted about the “major social upheaval” that a decision favoring the LGBTQ+ individuals would supposedly have.

I’m sorry – actually, I’m not – but numerous surveys about this subject, including the one previously referred to all show that to a large extent, this is a cultural ship that has already sailed. It’s highly doubtful that a decision confirming full LGBTQ+ equality would cause anything resembling “major social upheaval.” To begin with, just look at some mathematical facts: Roughly 70% of the American public identifies as Christian of one sort or another. At the same time, as seen in the Reuters survey, almost that same percentage of the public favor LGBTQ+ non-discrimination law. This means that there is already a huge amount of overlap of the two groups “Christian” and “Supports LGBTQ+ Equality.” There would most assuredly be some social consternation, limited to those people who believe – just as previous generations believed regarding racial and gender discrimination – that they have a right to discriminate against other citizens because of their own particular religious beliefs.

Even more important than the concern being misplaced is the reality that every single advance made in this country living more fully into the promises of its founding documents and principles has caused social upheaval, sometimes truly major social upheaval. It is inevitable. If avoiding social upheaval were a legitimate reason to not advance our society, nothing would ever improve.

It’s delusional to think that progress can be made without some kind of social upheaval. It’s disingenuous to use that as an excuse to deprive millions of people their Constitutionally-protected civil rights and equal protection under the law.

I speak as a married gay man, and as an ordained minister and pastor in the Presbyterian Church. The mere fact that that can even be possible caused no small amount of “social upheaval” in itself, and thanks be to God for it. I have come to believe that a large part of why God called me, a person whom God knew was gay long before I knew it myself, into pastoral ministry at all, was to be a witness – an illustration – to people inside and outside the church that God does indeed call and equip LGBTQ+ people into the church and its leadership. Another, even broader, part of that is to illustrate to people who don’t yet understand, possibly because they’ve never knowingly had a relationship with an LGBTQ+ person, that gay people – people like me – are really no different from them. At least, I’m no more different from them than they might be from another straight person, and maybe there are more significant differences between them and the other straight person than between them and me. In short, I believe a part of my divine call is merely to illustrate my equal humanity to others who don’t understand that. To show those who don’t yet quite understand that as an LGBTQ+ individual, I have the same dreams, fears, worries, aspirations, goals, loves, that they do. I laugh, I cry, I hurt, I mourn, I celebrate, I contemplate. I am your brother, your son, your father or uncle or cousin. I am your neighbor, your coworker, and yes, in my own case, your pastor. I have the same need as you to be a valued, respected, equal member of the society I was born into. I am not scary; I’m not something other. I am you.

But I have the same demands, too. I demand that the equal rights and equal protection under the law that I’ve been assured of based on my citizenship be protected and respected. I demand that the government not permit a particular minority within a particular sectarian religious group to have veto power over those rights, and my equality in our nonsectarian, secular, pluralistic republic. I’m not asking the government to grant these rights to me; I’m demanding that they protect these rights that I already have as a birthright, and that are being denied me. I demand that my government live into the principles ensconced in its founding documents, the same principles that are so widely given lip service to but so frequently ignored.

This one Supreme Court Justice who seems to be the swing vote in these cases was put in place by a conservative power block who frankly, expect him to be nothing more than a guaranteed knee-jerk vote to support their own political agenda. Now that he’s been appointed, he finds himself at a crossroads of history, about to make maybe the single most significant ruling by which history will judge him. I do not humbly ask for special consideration, favors, scraps from the table of full equality from him. I demand that he live into this historic moment; that he not serve as a lap dog to political partisans. I demand that he protect my rights, and my equal protection under the law, that all full citizens have. I demand that he understand that doing so will cause some social upheaval, and that it will be worth it. I demand that he not allow a sectarian minority to hold millions of citizens hostage to their chosen religious beliefs. I demand that he use his own brain, and heart, and that he grow a spine, and a pair of testicles to go along with it, and once and for all do the Constitutionally and morally right thing.