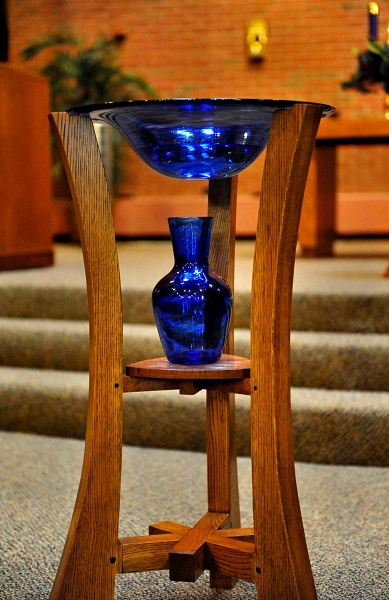 They went to Capernaum; and when the sabbath came, he entered the synagogue and taught. They were astounded at his teaching, for he taught them as one having authority, and not as the scribes. Just then there was in their synagogue a man with an unclean spirit, and he cried out, “What have you to do with us, Jesus of Nazareth? Have you come to destroy us? I know who you are, the Holy One of God.” But Jesus rebuked him, saying, “Be silent, and come out of him!” And the unclean spirit, convulsing him and crying with a loud voice, came out of him. They were all amazed, and they kept on asking one another, “What is this? A new teaching—with authority! He commands even the unclean spirits, and they obey him.” At once his fame began to spread throughout the surrounding region of Galilee.  – Mark 1:21-28

It happened more than ten years ago. I had just started pastoring this little country church about an hour south of Columbus, a brand-new Commissioned Lay Pastor, on the job for about a month, maybe two, ready to set the world on fire and do the very best I could for this wonderful little congregation. On this particular Sunday morning, I’d just taught an Adult Sunday School class, part of a series, about how the Bible came to be, and what the best available scholarship could tell us about who may have written various parts, and when, and why. When the class was over, as we moved into the sanctuary just before the service began, we noticed that we had visitors. They weren’t hard to notice, sitting in the sanctuary that held maybe forty or forty-five people on a normal Sunday. Four visitors, actually – a husband and wife, and a son, maybe 13, and a daughter, maybe 12. In other words, the supposed demographic gold mine for churches looking for visitors and potentially new members, especially for a congregation that hadn’t likely seen a new member in a number of years, and we were all pleased and excited to see them. They sat there in a nice row, each of them with their very own personal copy of the King James Version of the Bible with matching brown leatherette zip-up covers. The preaching text that morning was from the Second Letter to Timothy – and wanting to make some connection between the sermon and the Sunday School class, I’d wanted to say that even though the text of the letter says it was written by Paul, most scholars today agree that it wasn’t actually written by Paul, but rather, it was likely written by one of Paul’s followers, but ultimately that wasn’t important; what mattered was the content, the point that the words were making.

That was what I’d intended to say, anyway, but I never quite got all that out. As soon as I said that Paul likely hadn’t written the letter, the husband in this family jumped up out of his seat – it was so fast, so instantaneous, that you’d have thought the pew was spring-loaded and he’d just been ejected into the air. And within a split second, the three others sprung up, too. And the man started pushing his family out into the aisle while waving his finger at me and yelling at the top of his lungs, “Shame on you! Shame! Blasphemy! This is the Word of God! Paul wrote it or he didn’t; he wrote it or he didn’t! Shame on you! Shame! You’re a blasphemer!!!!” And he kept right on yelling as he marched his family up the aisle, and out the door, and SLAM! They were gone.

Well, my CLP training had prepared me for a lot of things, but this wasn’t one of them. I vaguely remember standing there in the pulpit looking as shocked and surprised as everyone else, but then, after a moment of fumbling around both verbally and physically, I regained my stride and we went on with the service.

Well, the following Sunday, the loud, spring-loaded visitors were still on everyone’s mind. Now in this church, there was a sturdy old oak office chair that sat along the back wall of the sanctuary, just inside the main entry vestibule. And every Sunday, a man named Joe, who was sort of the unofficial head usher, sat in that chair. So this Sunday, with people wondering what I might say about the events of the week before, I stepped into the pulpit, cleared my throat, and I looked to the back of the sanctuary and said, “Um, Joe, would you lock the door?” And we all laughed, and life went on.

In today’s gospel text, we heard about a similar kind of unexpected disruption and challenge to Jesus as he was teaching in a synagogue very early in his ministry. Of course, he handled his situation more decisively and with more authority than I handled mine, but, you know, that makes sense because he’s Jesus and I’m not. But just picture that scene. There’s Jesus, preaching and teaching and the people are amazed at what they were hearing, until Jesus is interrupted by this man that Mark tells us was possessed by an “unclean spirit.”

If you’re like me, you get a little uncomfortable with scriptural stories of spirit-possessed people. I mean, we’re living in an age of advanced knowledge of all sorts, and we also know that any number of perfectly understandable, non-supernatural mental illnesses were described in the pre-scientific culture of Jesus’ time as having been possessed by an unclean spirit. On the other hand, we know that we are beings of both body and spirit,  inherently, as part of our being human. We know that there is certainly a spiritual realm to the universe. So what was really going on with this disturbed man in this story?

I guess to me, the question of whether the man was possessed or suffering a mental or emotional illness is as unimportant as whether Paul wrote Second Timothy or not. The important point, to me, is the agony, the despair, that the man was feeling – and that he was apparently feeling it because of what Jesus was saying. Jesus was proclaiming the gospel, the good news of God’s love for all people. He was proclaiming the arrival of God’s good news for the poor, the sick, the lame, the hungry, the widow and the orphan and all those who have been pushed aside in this world.

And somehow, this was apparently bad news for the man. Clearly, whatever the details of his condition, he was miserable, but at least there was familiarity and comfort in his misery. He knew what he could count on, and what he couldn’t. But now, this new message from God, delivered with power and authority, meant that all that the man had come to depend on was being tossed out. Now there would be new rules, and undoubtedly change, and uncertainty; and for him, that wasn’t seen as gospel, good news, at all, but rather, it was very bad news, even with the love that the message came embedded in.

In response, Jesus speaks powerfully to the man; harshly, even. This actually becomes a recurring theme in Mark’s gospel, Jesus from time to time speaking with real harshness,  even anger, and virtually every time it happens, it’s a case like this – where Jesus is essentially rebuking someone or something in this world that was working to keep people from experiencing the full, abundant, loving, and yes, risk-taking, life that God intends for all of us. In this story, whether the man is literally possessed or not, Jesus is essentially “repossessing” him, whether he likes it or not; reclaiming him from being a child of misery and hopelessness, and reclaiming him as a child of God, belonging to God and God alone, and deserving of so much more than the limited, and limiting, way of living that the man had become accustomed to.

In just a little while, we’ll be baptizing Matilda. In a way, baptism is a sign of this kind of repossession that’s occurring in this story – this idea of God clearly, decisively, and with power and authority claiming a person as belonging to God, and being a part of God’s covenant, and deserving of that same full, abundant life that Jesus wanted for the man in this story.

On this day, when we celebrate this new baptism, let’s think about our own baptism, and what it means to us – both the grace, the love, the acceptance; as well as the challenge and the responsibility, because in the realm of God we never get one without the other.